One of the most prominent activities is the school exchange. Exchanges are an important step both in encouraging language learning and in fostering inter-cultural understanding.

This year two exchanges have been organised with German schools: one with Sophie Scholl-Berufskolleg Duisburg (North Rhine-Westphalia) for vocational training students, and the other one with Markgraf-Georg- Friedrich-Gymnasium Kulmbach (Bavaria) for students of the fourth year of Secondary Education. Our pupils tell you about their experiences.

We are six students of vocational studies (tourism) at this school. We would like to share with you our exchange experience in Germany.

We went to Germany in December and spent one week there. We stayed with German families and enjoyed and learned about their culture, costumes and way of life. At first it was a little bit hard for us because everything was different and, although we had been in touch for some months through the eTwinning Project “La vida de los jóvenes europeos “, we did not know each other well enough. It was on the second day after our arrival when we felt comfortable and didn’t want to return to Spain.

In Germany we visited some cities such as Düsseldorf and Cologne. We had the chance to visit different christmas markets and see beautiful Christmas decorations. We also spent some time at the German high school, where we took part in different activities such as cooking and playing different sports.

This experience has been amazing in several aspects. Now we recognize the importance of learning foreign languages and we are aware that we still have a lot to do in order to improve our linguistic competence in English. Apart from letting us know about the

German culture and German people, it has also given us the opportunity to know a little bit more about ourselves.

Students exchanges are unforgetable and recommendable experiences that should always be supported by school authorities. We know from our experience that travelling abroad and meeting people from other countries help us to be more flexible and open-minded, two qualities which are necessary to widen the range of opportunities in life.

Last but not least, we would like to thank all the people who have made it possible and encourage them to push forward with these activities, which are enriching both in professional and human terms. 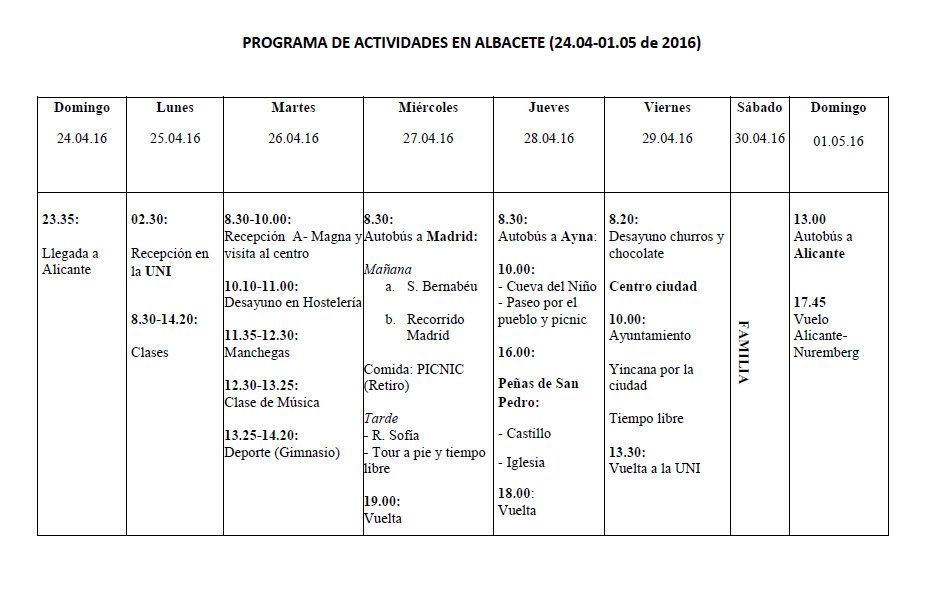 It was the first time that someone from a foreign country stayed at my house, so, my parents and I were a bit nervous.

When they arrived at two o´clock, at first I could not find her, because of that, I became more and more nervous. Finally, she found me and we went to my house. It was too late, we were tired and we did not talk much, but, the following day, it seemed that we knew each other since we were born! I showed her the house and we had breakfast… I was very surprised because Antonia (my German partner) had never eaten toasts with olive oil before! (in the end, she loved them)

She is thirteen but we have many things in common, she showed me her favorites books and her favorites CD´s and I showed her mine, and we discovered that we had many similarities.

She tasted some typical Spanish food such us tortilla, paella or gazpacho. On Monday, we had dinner at “tascas” and she tried snails… Although she liked most of the Spanish food, I think she did not like snails.

Playing with Antonia and my family the German games she gave me was the activity I enjoyed the most. One of them was similar to “parchis”. It was very funny! It has been an incredible experience because I have improved my English, I have learnt some words in German, for instance: Ich liebe dich (it means “I love you”) or Ich mag kartoffeln (it means “I like potatoes”), and I have met people who I will neve forget! It was also very interesting to spend time with the German students and compare both cultures: I realized that Spanish and German people have many different customs.

I am looking forward to going to Germany and meeting her family. I also want to taste German food because Antonia told me about some typical meals and they must taste very good!

But, what I want the most is to see Antonia again! 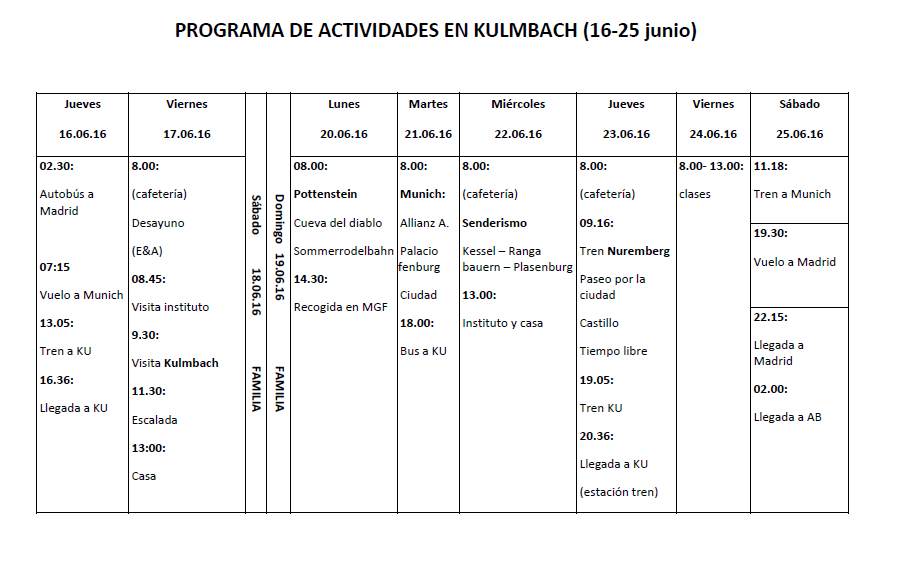 Copyright © 2008 - 2015 JoomlaShine.com. All rights reserved. Many features demonstrated on this website are available only in JSN Solid PRO Edition.

All stock photos used on this JSN Solid demo site are only for demo purposes and not included in the template package.